It Was All in the Cards 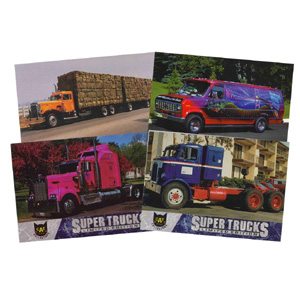 When most kids go on vacation, the destination is usually a water park or Disneyland or an historic monument, like Mt. Rushmore. But not for Delia and Jill Moon.

“When I was in junior high and we went on vacation, we were always looking at truckstops,” says Delia Moon-Meier, Senior Vice President of CAT Scales and Iowa 80 Group.

“I remember one year we were going to Memphis, but we went by way of Nashville because there was a big new truckstop there called TA. Dad would go in and ask to see the manager. Then, as we had dinner, the manager would stop at our table and they’d talk for what seemed like hours,” she recalls with a laugh of fondness.

“It makes me laugh to remember that. And now I do the same things to my kids, though they don’t seem to mind as much.”

At any of those truckstop visits, if Bill thought a CAT Scale would work at that location, he’d talk to the manager about it. If they seemed receptive, he’d follow up with them later. Little did Delia realize that all those truckstop vacation visits would help prepare her to eventually become part of the truckstop business herself. Of course, having a business management degree from the University of Iowa helped, too. She began her career after graduation in 1987.

About five years into working for the family business, Delia and Bill Mayhew talked about a new idea to help promote CAT Scales. At this time, 1992, the Moon family had a restored Kenworth making the cross-country trek as part of The Great Race, an annual event where antique vehicles drive across the United States. Mayhew and his wife were handing out postcards of the CAT Scale’s 1938 Kenworth race truck to folks along the route, and the cards were well received. So Mayhew told Delia about a restaurant that had a trading card gimmick to promote the business and customers seemed to like it.

Seeing the reactions to the antique vehicles and the Kenworth postcards at The Great Race, and thinking about some of the show trucks that she had seen taking part at the Walcott Truckers Jamboree, Delia thought it just might work.

“I realized it was not just my dad loving trucks. I came into contact with many people who loved trucks just as much as my dad did.” Some of those people belong to a group called the American Truck Historical Society (ATHS), and it’s a community of people who love trucks.

So the idea of the cards seemed like a great one. It was decided that each time a driver weighed at a CAT Scale, they would get a card which would be part of their scale ticket. Of course, back in the days of fledgling computer technology and dot matrix printers, there were some logistics to work out. It took a big team effort, with hundreds of letters and phone calls. Remember, this is in the days before e-mail. But, in the end, the idea really blossomed, and it was more than just a gimmick.

“We were trying to create a way to honor our customers and drivers. People love them [the cards] and they want to be on them. They feel like celebrities. They even sign them and hand them out to kids.”

Today, drivers collect cards and keep books of them as collector’s items. So I guess you could say that, when it comes to success, for CAT Scales, it was all in the cards.