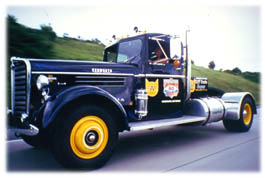 This is the famous Great Race truck sponsored by CAT Scale Company. The truck has participated in a rigorous 4,500 mile, cross-country road rally each year since 1990. Look for the Kenworth at upcoming truck shows.

This 1938 beauty is also featured on our classic t-shirt honoring its longevity and on our new “We’ve Got Your Back” t-shirt. 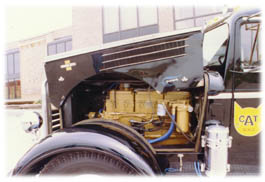 More About The Engine

The Kenworth was originally equipped with a Hall Scott model 177 gasoline engine. This engine was replaced with the Cummins, that is currently in the truck, when the truck was first restored prior to CAT Scale Company ownership.

The Cummins is a model HBIS-600 with 175 horsepower at 1800 rpm. The 600 represents the cubic inch displacement of the engine. Right hand rotation. The engine was made on January 31, 1941. It has a belt drive supercharger that turns at 1.8 times crankshaft speed. At 1800 engine rpm it is turning 3240 rpm. The supercharger was made by Schwitzer for Cummins. The supercharger gives the truck its distinct exhaust sound and was the forerunner of turbocharging that is used today.