CAT Scale Company celebrated the opening of its 2,000th truck scale on November 18, 2020 at the Road Ranger in Marion, Illinois. “When we started CAT Scale I don’t think anyone envisioned we’d have 2,000 scales in operation. It’s definitely a milestone to celebrate,” says Delia Moon Meier, Senior Vice President. “I remember my dad, Bill Moon, thinking that 100 or 150 would saturate the market. We are so appreciative of all of our truckstop partners and we are honored to be able to celebrate today with Road Ranger and their great staff.”

CAT Scale founder, Bill Moon, installed the first CAT Scale in 1977 in South Holland, Illinois. In 1988, there were 28 CAT Scales in existence. At that time the company began to rapidly expand. Now there are 2,000 CAT brand scales in 47 states and 7 Canadian provinces with more opening each month.

Professional drivers depend on CAT Scale; which provides a much-needed weighing service to the trucking public. Drivers who weigh on a CAT Scale are covered by a no-excuses guarantee. If a driver receives an overweight fine after weighing legal on a CAT brand scale, CAT Scale Company will either pay the fine or appear in court with the driver as an expert witness in order to get the fine dismissed.

CAT Scale Company is the world leader in truck scales and the world’s largest truck scale network. More information on CAT Scale can be found on-line at www.catscale.com. 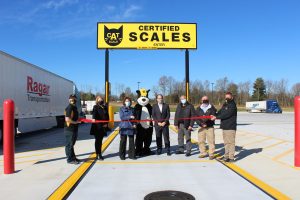